The foundation has invested funding and effort (in particular through the work of Yann Régis-Gianas, teaching representative on the Executive Board) in the Learn-OCaml technical platform for online exercises, which powers the OCaml MOOC and several OCaml courses in university.

We are interested in supporting other technical platforms that allow teaching OCaml to a wide audience, in a school/academic setting or for self-learning; we would also like to grow an open corpus of teaching and learning material, and support in-boarding actions towards non-OCaml programmers.

The Learn-OCaml exercise platform is open-source and easy for anyone to deploy locally to support their OCaml courses.

We relicensed the codebase to MIT, and funded further development of the platform by OCamlPro. We employed two interns to write documentation for teachers (platform, exercise-writing...) and review pedagogical material.

We are actively working on an instance server, to make it easier for people to deploy new instances for their courses without having to host one locally -- which is fairly easy to do

We fund teachers to contribute high-quality exercices to a common exercise database for the Learn-OCaml platform. In particular, we received 10 high-quality advanced exercices from François Pottier, and made available 40 exercises from the MOOC.

We are trying to build a community of OCaml teacher sharing teaching documents. We provided financial support for a CS-teaching conference at the French national level in 2018, and presented our teaching efforts at the OCaml Workshop on the same year.

We provided some financial support for new OCaml courses in 2018, at the Paris-Diderot university (France) and McGill University (Canada). You may be interested in the McGill ICFP'2019 experience report on their new course using the Learn-OCaml platform.

We are funding an initiative in the NOVA University of Lisbon and the University of Beira Interior (Portugal) to research and teach the foundations of computer science using OCaml, bringing new technical developments to the Learn-OCaml platform. 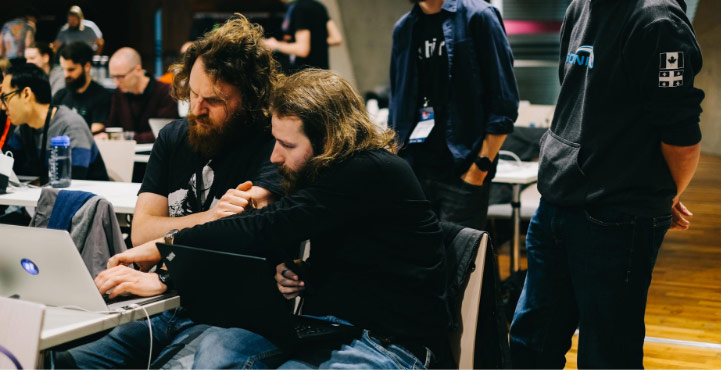 We sponsor video-capture for the Paris OCaml meetup. (If you would like to run a regular meetup in another city, feel free to get in touch!).

We sponsored the SWERC programming contest for 2019-2020, and in return the contest added OCaml to the list of available languages.

We are sponsoring a development sprint for the Owl project for scientific computing in OCaml.

We funded Outreachy internships in 2019 and 2020, to participate in improving the diversity in the OCaml community.

We funded a research internship on type inference, to study approaches to keep the type-checker predictable and robust as the language evolves.

We provide funding for the Cambium research team at INRIA Paris (France), an active place for OCaml-related fundamental research (some of the team members are also very active on the implementation front, for example Xavier Leroy, Damien Doligez, Florian Angeletti, and Sébastien Hinderer).

We are funding work to improve the OCaml reference manual, and the documentation on ocaml.org.

We are funding work by Kate Deplaix to improve the compatibility of the opam-repository ecosystem with new OCaml releases. This work has been ongoing since OCaml 4.10, and users report quicker and smoother upgrade process, with most of the ecosystem now compatible at the time of the release.

We provided financial support for the ReasonML association in 2018-2019, as it was just starting.